About six weeks ago I started the journey to hosting my websites on my own web server located in my home office. I know, not the main stream approach. I wanted to test this idea first before I made a real commitment to it, so I dusted off my old Dell E520 that previously had been my workstation until about a year ago. It has been sitting under my desk for about a year not being used.

I have a business account with my ISP that allows me to run a server. No blocked ports. I have always discouraged others from running a web server under these conditions because this is not optimum. I only have one connection to the Internet and no backup power. Again, this was, and is an experiment. And of course I would like to learn from this project.

I feel I have decent Linux skills, however I am not at the level of a professional system administrator. I do some Linux admin stuff because I have to as a PHP programmer. Up to this point I have not configured a mail server, other than the test I did two years ago when I configured Qmail Toaster to run on CentOS on an old laptop running a 1GHz Celeron with 256MB of RAM. It worked. I learned a lot. Unfortunately Qmail Toaster has not been upgraded to CentOS 6.x. I would have loved to have been able to use it for this project.

My friend Nathan is much more skilled at Linux system administration than I am so he configured Apache, the PostFix mail server, and Bind for DNS. I am truly grateful for Nathan’s help. I would not have attempted this project without him.

The requirements for this project were minimal. I run two very low traffic websites, and have a number of parked domains. Each of my active websites run WordPress and the parked domains use a single parked page.

For the last 6 months I had been considering a NetBook for this project or just as a test. I think a Netbook would have made a very interesting project and I would have had lots to share, however I am glad I did not do so for this project. The netbook I was looking at was running the Intel N2600 CPU and had 1GB of RAM. Probably would have worked, however it is a little under powered.

It has been 6 weeks since configuring my old Dell Dimension E520. It seems to be doing very well. Both my WordPress sites are running very nicely and that is without cache.

I have not experienced any bounced email or any other problems. I did have to have my ISP add my domain as the reverse look up on my IP. Was painless – just one short call and they configured it.

So far so good! 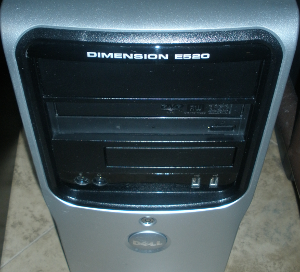 I found a really good deal on an HP. I bought it from a local store and as soon as I got it home I took a look. It was very nice. Only problem was the hard drive was mounted directly to the frame. The tower was smaller than most and the hard drive had two rails partially surrounding it. More like two guides. These two rails were not a drive bay. More like guards so the hard drive could not fall onto the motherboard. The rails were part of the frame. There was no way to mount a second drive. You can see the specifications below. The box was on sale for $329.95. It was a great deal and would have been more than I would have ever needed. If I needed more it would have been time to move to a data center so I would be able to take advantage of multiple paths to the Internet and power backup. 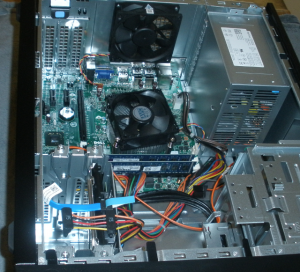 I really like Dell so I started looking for a Dell. I really wanted an Intel CPU as well. This is where the slippery slop began. Dell was discounting the Inspiron 660 with the below listed Specifications. This was much more machine than I needed to host my low traffic websites. If my websites ever need this much power, they should be on a server in a data center.

I ordered a second hard drive and cable from NewEgg.com, which arrived about a week later. The Inspiron 660 was here in 3 days.

So far this project has cost $693 counting the battery backup, I have yet to purchase.

I’m saving $25 a month in hosting fees so it will take me roughly 28 months to breakeven. Not bad considering this box could last 6 to 8 years. I probably would not use it as a web server that long though.

I will probably configure the new Dell as my web server to replace the E520 in a week or two. I’ll write more at that time.

In the end the box I bought to host my websites from my home office is over kill. If I even need half that power I will be getting so much traffic I would be crazy to host my websites out of my home office. This is an experiment and a learning tool. It has already been a learning experience and has pushed me to learn more to be able to do some of the things I need to do to support my own web server.

Hi, I'm Keith Smith. I built my first website in 2000. A lot has changed since then. I've been a freelance PHP developer since 2006. If you would like to reach out to me visit my contact page click here to go to my contact page or feel free to call me directly at 480-748-9893. Look forward to hearing from you soon!!

link to Contracting with a PHP Programmer

Once you decide you want to take your project from an idea to the next phase - finding a programmer to bring your project to fruition, there is a number of things to consider.  There is a lot to...

I like the matched pair table because it makes creating and maintaining an application much simpler. Once you see how this concept can simplify your life you will be hooked.

Hi, I'm Keith Smith. I built my first website in 2000. I've been a freelance PHP developer since 2006. A lot has changed since then. If you would like to reach out to me visit my Contact Page or feel free to call me directly at 480-748-9893. Look forward to hearing from you soon!!